The Real Authoritarians vs Trump by Rosario Sicario 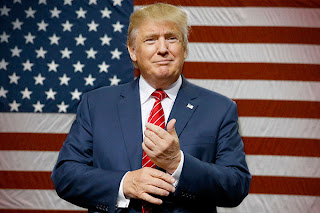 There has been a lot of hype about supposed Russian connections with the Trump campaign/administration. Any reasonable person can see there is a lot of smoke but no fire. The only solid “links” have been General Mike Flynn’s contacts with the Russian government, which was part of his job as national security adviser, and Paul Manafort, Trump’s convention manager, who helped Viktor Yanucovich’s campaign in Ukraine. In short, all of the supposed links between President Trump and Vladimir Putin are tenuous at best. Regardless, it doesn’t stop the Mainstream Media from pushing this fiction in what is clearly an attempt to undermine the legitimacy of the 45th President by accusing him of being an authoritarian puppet of the Kremlin. Even though it’s fiction, it’s made strange bedfellows of the cucked #NeverTrump republicans and the bitter Democrats that still cannot come to terms with the real reasons that they lost the 2016 Presidential election.
There seems to be one theme that unites the #NeverTrump and Left in their opposition to the God Emperor, America’s LORD and Savior, the 45th President of the United States – Donald J. Trump. That theme is that Trump is an authoritarian. Yes, you read that right, our President is supposedly looking to singlehandedly destroy our Republic, decimate our institutions, and usher in a new era of mass oppression under his reign such as we haven’t seen since the 1930s.
What the fake news, mainstream media that gives voice to this absurd narrative fails to inform you about is that the US has already been living under an oppressive regime that has been eroding our liberties for years. Ever since FDR, our federal government’s bureaucracies have been growing like a malignant cancer. Our politicians have created department after department, passed law after law, and executive order after executive order that has encroached on our Constitutional Rights. This deep State regime allows the NSA to spy on us, the IRS to target us for contrary political beliefs, and even allows the TSA to molest us should we choose to board a flight.
If the definition of authoritarianism is:
“of or relating to a governmental or political system, principle, or practice in which individual freedom is held as completely subordinate to the power or authority of the state, centered either in one person or a small group that is not constitutionally accountable to the people..”
Then how can we not acknowledge that we have been already living under that kind of system for decades? The truth is we have had an “authoritarian” government since Kennedy was assassinated – we’ve had a government controlled by the special interests of the military-industrial complex, Wall Street, and multinational corporate interests. Why? Because most of our US politicians, especially those that have served as POTUS, have been mere puppets of these interests. Indebted to them by their campaign contributions. Furthermore, none of those special interests groups are accountable to the American public. None. Not one.
Imagine the worst thing about President Trump that you possibly can but the one thing that is undeniable is that he is not controlled by these special interests. How do we know that? His FEC filings, most of his campaign contributions came from individual donations and out of his own pocket. We know that all of the special interests monies went to opposing, not supporting him. In light of this, it is easy to see why brainwashed individuals on the “left” taking in heavy doses of CNN, NY times inspired fake news could be lead to believe our that President is an authoritarian simply because he is taking bold lawful actions that our past Presidents have needed permission to do. He is wielding the authority of the executive branch in the way that he’s sees fit to make America Great Again. Not the way Bill Kristol and the neocons want, not the way the Left wants, not the way the special interests groups want, and that has to make a lot of those people very angry, so they’re lashing out. Let them eat cake.
True patriots like us don’t see Trump as a Mussolini or Hitler, albeit some of us like to use that trope to gaslight the Left, but in our heart of hearts we see our President as a champion of liberty and American exceptionalism. For years he has seen our Nation being ripped off while American workers got the short end of the stick in a Global economy. President Trump has seen how political correctness warped our culture by restraining free speech and expression, so he ran a very anti-PC campaign that galvanized the support of college-aged males that contributed to his massive electoral victory in critical swing States. Bottom line, Trump isn’t an authoritarian, but he will act with his executive authority unapologetically to make America safe, prosperous, wealthy and greater than ever before.

Rosario Sicario is an independent journalist from Washington.

All content is property of its respective independent contributor. The Liberty Chronicle Independent and its Editor make no claims or endorsements regarding independently contributed content.
Posted by David Malekar