Liberty Chronicle Independent was on the scene outside of local news station K5 in Seattle covering the "Open the Presidential Debates to Dr. Jill Stein and Gary Johnson" protest.

There was a unification in stance against the debate commission as also seen in Washington D.C.; Both the Libertarian Party and Green Parties of King County (Seattle) joined forces to raise awareness of Presidential candidates Gary Johnson and Jill Stein, and their exclusion to the first National Debate between Hillary Clinton and Donald Trump.

Both Gary and Jill are polling high, yet have been excluded from the first debate.  Johnson supporters at the protest made the claim that being on the ballot in all 50 states and D.C. should be an automatic inclusion to the debates.

One thing is certain, there is a sense of unity among independents.  "The Green Party and Libertarian Party are essentially the same on social equality, we only differ on the economic side.  As far as I'm concerned, we're in this fight together until we are both given equal access to debates and ballot access.  We can sort out the minor differences in details later," one Libertarian said. 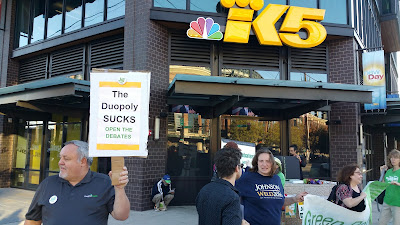 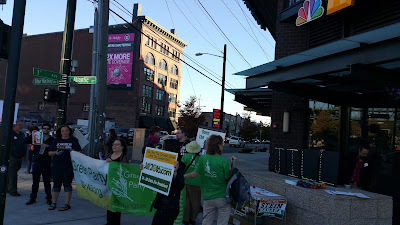 This contribution is from Seattle-based independent journalist, David Malekar, Independent Associate Editor for the Liberty Chronicle Independent; who publishes content to the WashCo Chronicle and other online publications.