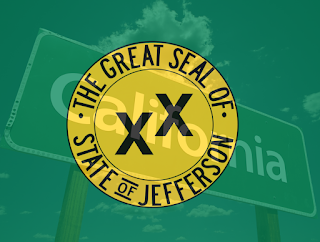 "A complaint was filed by multiple parties on Monday regarding California's representation problem. Many parties including cities, individuals, political parties and even a native tribe have filed a suit saying they are not being represented correctly. With all districts in the State of California reaching one vote for every 500,000  people in a single district. This virtually waters down the individuals voting power to so little there becomes minuscule purpose in voting.

The purpose of our government is to accurately represent people. Having a lower ratio of representatives in proportion to the population is against the initial principles of this country. Citizens of California have finally decided to question the State government as is apparent in this complaint.   The question becomes what will the State of California do with this? How will the Attorney General respond? California has an obligation to answer to its people these very serious questions. It is a question to the nature of our republic."

Courthouse News Service published an article on May 9th, 2017 on the subject as well.
Link: https://www.courthousenews.com/feeling-underrepresented-california-groups-demand-1200-lawmakers/

An eclectic group of plaintiffs of all political stripes want to renovate California’s political system, which they say is burdened by an “oligarchic” state government shaped by exponential population growth and an influx of corporate money in local elections.

Led by a group of secessionists whose main goal is to eventually break away from California, the plaintiffs claim in a federal lawsuit that the Golden State has stubbornly refused to increase its number of elected state lawmakers despite a population that has ballooned to nearly 40 million. With just one state senator per approximately one million people, the Californians say their votes have been diluted and their elections “purchased” by candidates from the two major parties.

“California has the worst representative ratio in the United States,” said Mark Baird, plaintiff and member of Citizens for Fair Representation. “The founders envisioned one state senator per each county and one assemblyman for every 25,000 people.” 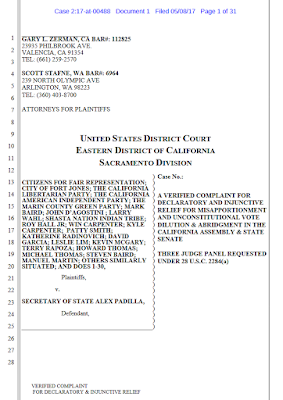 Click this link to view the document in its entirety:
Link: http://lcinews.net/JeffersonCase2017/JeffersonMay.pdf

Here is a preview of the complaint that is being filed by the following:


"The great experiment and promise of Independence - “We The People” – launched the American Revolution that led to The United States of America, was based on the fundamental founding organic principle of “No taxation, without Representation - Give me Liberty, or give me death.” Sadly, this paramount principle of representation - that the people themselves provide the basis for governmental sovereignty and legitimacy - has been abridged by California.


This neglect of “We the People” as the organic basis for this Nation’s self-governance stems from the cap the California government placed on the number of Senators (limited to 40) and Assembly Members (limited to 80) in 1862, when the population of the State was less 420,000 people. This arbitrary cap has created an oligarchy inconsistent with representative self-governance because the same number of legislators (120 total) now attempts to represent California’s present population of nearly forty MILLION (40,000,000) people. By any metric, this is impossible; 120 legislators cannot possibly represent forty (40) MILLION people in any effective, equitable and meaningful manner as contemplated by the United States Constitution and Amendments thereto.


Since the end of the Civil War the United States has consistently strengthened its commitment to a representative form of self-governance by ratification of Constitutional Amendments and treaties designed to promote the people’s participation in governing at both the National and State levels. California's refusal to increase its levels of legislative representation to reflect its exponential population growth is both arbitrary and unconstitutional.


As a consequence, the premise of the People’s right to participate in meaningful self-governance has been abandoned. California elections are effectively “purchased” by candidates who are in the service of the two major parties and no longer represent the people. Accordingly, Plaintiffs bring this lawsuit to return their representation to those principles contemplated by the founders for a representative republic, or in the alternative to sanction California for its brazen subjugation of the people’s right to govern themselves."

Click this link to view the document in its entirety:
Link: http://lcinews.net/JeffersonCase2017/JeffersonMay.pdf


This contribution is from Seattle-based independent journalist, David Malekar, Editor in Chief for the Liberty Chronicle Independent; and publishes content to other online publications.
Posted by David Malekar